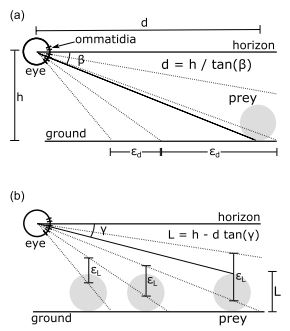 Tiger beetles pursue prey by adjusting their heading according to a time-delayed proportional control law that minimizes the error angle (Haselsteiner et al 2014 J. R. Soc. Interface 11 20140216). This control law can be further interpreted in terms of mechanical actuation: to catch prey, tiger beetles exert a sideways force by biasing their tripod gait in proportion to the error angle measured half a stride earlier. The proportional gain was found to be nearly optimal in the sense that it minimizes the time to point directly toward the prey. For a time-delayed linear proportional controller, the optimal gain, k, is inversely proportional to the time delay, τ, and satisfies kτ = 1/e. Here we present evidence that tiger beetles adjust their control gain during their pursuit of prey. Our analysis shows two critical distances: one corresponding to the beetle's final approach to the prey, and the second, less expected, occurring at a distance around 10 cm for a prey size of 4.5mm. The beetle initiates its chase using a sub-critical gain and increases the gain to the optimal value once the prey is within this critical distance. Insects use a variety of methods to detect distance, often involving different visual cues. Here we examine two such methods: one based on motion parallax and the other based on the prey's elevation angle. We show that, in order for the motion parallax method to explain the observed data, the beetle needs to correct for the ratio of the prey's sideways velocity relative to its own. On the other hand, the simpler method based on the elevation angle can detect both the distance and the prey's size. Moreover we find that the transition distance corresponds to the accuracy required to distinguish small prey from large predators.

Tiger beetles are fast diurnal predators capable of chasing prey under closedloop visual guidance. We investigated this control system using statistical analyses of high-speed digital recordings of beetles chasing a moving prey dummy in a laboratory arena. Correlation analyses reveal that the beetle uses a proportional control law in which the angular position of the prey relative to the beetleˇŻs body axis drives the beetleˇŻs angular velocity with a delay of about 28 ms. The proportionality coefficient or system gain, 12 s-1, is just below critical damping. Pursuit simulations using the derived control law predict angular orientation during pursuits with a residual error of about 7°. This is of the same order of magnitude as the oscillation imposed by the beetle's alternating tripod gait, which was not factored into the control law. The system delay of 28 ms equals a half-stride period, i.e. the time between the touch down of alternating tripods. Based on these results, we propose a physical interpretation of the observed control law: to turn towards its prey, the beetle on average exerts a sideways force proportional to the angular position of the prey measured a half-stride earlier.