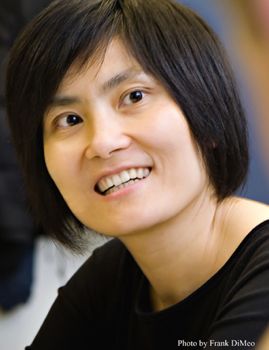 Jane Wang is a theoretical physicist studying the physics of living organisms. She received her PhD in Physics from University of Chicago in 1996. She was then a NSF-NATO postdoctoral fellow at the department of theoretical physics of Oxford University (1996) and a visiting member at New York University's Courant Institute of Mathematical Sciences(1997-1999). She joined Cornell in 1999, where she is now a professor of physics, and a professor of mechanical and aerospace engineering.

Her research aims to identify, investigate, and discover new phenomena in a broad range of physical and biological systems. She has worked on problems in statistical physics of turbulence and turbulent diffusion, fluid dynamics, and computational and applied mathematics, and is drawn to the aesthetics in nature, science, and art.

She has devoted much of her work to understand the physics and neural feedback control of insect flight: how do insects fly, why do they fly the way they do, and how can we infer their 'thoughts' from their flight dynamics. Her recent works build new connections between the physics of flight and insect's neural behavior.